Since 2005, the Comedy Club 4 Kids has been getting the best stand-ups, sketch acts and cabaret stars from the international circuit to do their thing for an audience of children (aged 6+) and their families... but without the rude bits! Both onstage and in our Radio Nonsense podcast, everything is tailored to entertain all ages. The show is just like a normal comedy club, but it's on in the day, kids are allowed in, and thus there is a higher than usual chance of the entire audience claiming to be called Bob. 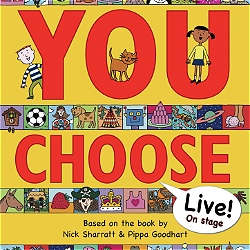 You Choose – Every show is unique! Based on the brilliant book by Pippa Goodhart and Nick Sharratt Nonsense Room Productions (Shark in the Park and Hairy Maclary Shows) bring yo...